I forgot to post this when I made it last week!!

This quesadilla was delicious. I swear I will make this again and I especially can’t wait to make it for the boyfriend. My recipe is for one, but double it as needed for two or more.

This would also be delicious with shrimp! I would recommend serving it with a coconut lime margarita on the rocks. Recipe for that to come soon 😉

We went to Geneva, Switzerland today. We took a train at 8:30 a.m. and were in Geneva by 10:30 a.m. Such a quick nap to such a wonderful destination!

Once we got there we had to exchange our euros for Swiss Franks. OK, I’m not going to lie, that was pretty effing annoying. The Frank is apparently comparable to the American dollar, except everything in Switzerland was overpriced! Sorry, no, I am not paying $8 for a cupcake. I’ll give you a real life example: Leighann wanted a Swatch and it costs 90 Franks in Geneva but then she ended up getting it for 67€. I’d say she got a decent deal – even with the exchange rate.

Which reminds me…I owe Chelsea $9. I’ll just buy her a pitcher at Conor’s when we both get back to Boston.

Anyway, after finally figuring out our money situation, we decided to check out the United Nations. The people at the visitor’s center told us not to walk there, so naturally we did. It was a pretty far walk, but not altogether unpleasant. We walked along the lake and got a feel for the city. Then we arrived.

Flags of all the countries lined the entrance. We got in, paid our money and went on our tour. It was so phenomenal to stand in the rooms that the leaders of our world discuss treaties and war in. Just imagine being that powerful.

In one room, there were two separate entrance doors. At first, no one really understood this. But the reason for it is that when two countries are at war and must discuss conflict resolution, they enter and exit at the same time (rather that one entering before the other) so that neither person (or country) shows dominance.

Then we went for the most amazing fondue. We shared a huge pot of bacon flavored cheese fondue with ham (they think that bacon = ham here) chunks in it. It was really delicious but I don’t think I want to look at cheese for a while again.

After that we did some shopping and exploring and then, after blinking an eye, our day in Geneva was over. Such a beautiful city.

I wish I had more to say about today. On the plus side, we had Seb all day today. But other than that, I was pretty much in classes for about nine hours. I’m really starting to get sick of all these classes. Shouldn’t I just be enjoying my vacation in Europe? Why does this have to be school related?

I’m seriously loving the food here. I had the most fabulous Salade Lyonnaise at Gump’s Corner, this bar across the street. The ingredients are just wonderful.

The dressing is also phenomenal. I’m usually not a huge fan of mustard, but I plan to alter the recipe if I ever make it for myself at home.

Actually, I’m definitely making this for Dez when I get home. We may have found a salad Dez might actually like! It has bacon, but no Frank’s Red Hot. Win some, lose some.

I didn’t end up getting a prepaid phone (yet). I accidentally napped. Oh well! Myself and seven other girls just went on a quite interesting adventure around Lyon. Finally!

One of my dialogue-mates, Lizzie, accidentally took her entire French oral exams in English. Completely. She thought they were just filling out her sheet and having a conversation. I don’t think I ever laughed so hard when I learned that. Oh wait, I laughed pretty hard when one of the Kristen’s told us that for her eighth birthday, all she wanted as a present was stock in Mattel. Just picture an eight year old saying, “No daddy, I don’t want a Barbie, I just want eight stocks of Mattel.”

It was hilarious to say the least. But the food we had at the restaurant we ended up going to was phenomenal. I got the Menu Mama, which was three courses of absolute deliciousness.

The appetizer (which, in French, they call the Entrée) had pepperoni in the name, but included no meat. It was quite confusing.

The main course for me was a spicy pasta with tomato sauce. I didn’t realize how spicy it was until I started sipping on our Rose wine and then all of a sudden I needed to eat some bread before my mouth was on fire! It was awesome. Then for dessert, I got a caramel crème. Oh my word. It was along the lines of French Flan. Super rich and caramel-y (that’s totally not a word, I know) and wonderful. I am still so full and it’s been like 3 hours since we ate!

I love how in France they don’t rush you to get the check, pay and leave. But I definitely am still getting used to the whole idea of eating between 8-9 p.m. They don’t even give you the check until you ask for it. So awesome. Definitely much better than being rushed out of a restaurant to open up tables!

Then a few of the other dialogue-mates and I went to the Carrefour City (for, like, the fourth time since we’ve been here) and “Call Me Maybe” was playing. WHAT?! Why wasn’t it in French? Someone fix this.

People here love their radishes. I have never seen so many people buying radishes at the market than here. So I looked up a popular radish dish… 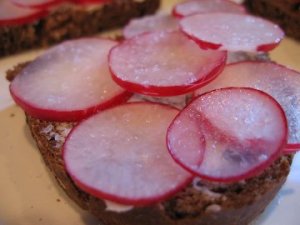 It’s literally sliced radishes, salt, butter and bread. But it looks pretty good. I’ll keep you posted on if I end up trying it out.

Our next adventure will be to find and potentially buy a prepaid phone…en Francais.

I am currently eating one of the best salads of my life. I indulged and bought all of the fruits and veggies I wanted at the market yesterday. Then I made the most ridiculous salad ever. Here it is:

Here’s how I did it:

I fail to see how anyone could dislike salad after having this amazing one. I am a huge fan of fruit in salad. I love putting apple in salad and I think maybe I’ll make a grilled chicken, avocado, olive, Feta and apple salad later actually.

What do you think of this salad idea? Too much stuff, or just enough?